What’s in a tin can? 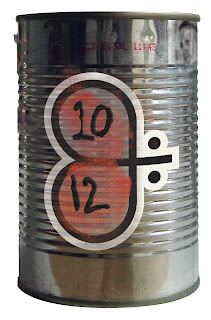 Tinplate (tin-coated steel) basically, but sometimes they’re lined with a plastic coating. When they’re opened they can contain plenty of things… baked beans, spaghetti, coconut milk, fruit, infant formula and so on. When they’re disposed of they can contain decomposing food, mould, rotting pet food, stench.

In my time of collecting these things, I seen just about everything, but can you see me? (Look at the picture). Accumulating these things, cleaning them, remove the lids, flattening them, and then storing them for the next project requires quite some effort. In the Tin Can-vas Series up to 60 cans at a time are secured by 300 fasteners to a substrate, taking around five hours to apply. Depending on the finish desired they can be treated with acids and coatings, cured in an oven and then printed, framed and overworked with other elements.

To maintain supply I’ve tried sourcing cans from can manufacturers, recycling depots, even via letterbox drops on a cash-for-cans basis, but without any real success. Far better has been to accumulate them through personal shopping at good ol’ Coles and Chemist Warehouse. The most effective means however has been to scavenge through recycling bins in the wee hours. Probably not legal… did I say it was me? Now I remember… some strange guy called Col Lector got them for me, I think.

I can recall a few stories. I needed some cans in a bit of a hurry so there was little option other than to drive around to the local Coles and pretty much clean out their Coles Brand spaghetti tins – my tin of choice for the job in progress. The assistant was stocking shelves at the time and gave me the WTF look. “Your family hungry?” he quipped. A trolley full of cans does look pretty weird. Once home I then had to get rid of the contents, froze some, tossed the rest, but spag doesn’t freeze too well, so in the end that was tossed too.

Collecting cans at night is a strange experience (so I’m told!!). There is the apprehension of getting sprung at anytime; of being confronted by hostiles; weariness balanced by adrenalin; satisfaction of a good haul; risk and adventure. Contact is rare, thank God. The point is not to rummage through contents of bins, but more skim off the top and move away quickly and quietly, careful not to stand in any doggie-do.

There have been times where a dog starts barking or a mass of bats suddenly takes off from a tree, which has almost converted the food cans into dunny cans.

Then there’s my 3-year-old son, Royce, who enquired about the tin-can patchwork I was working on.
“How did you make that?” he asked.
I provided a detailed answer; “First I have a piece of wood, then I flatten some cans and nail them on…”
“How did you make that?” he asked again.
This time I provided a simple answer... “With wood and metal and hammer and nails... Do you like it?”
“Yeah”
“Do you want it?”
“Yeah”.
“What are you going to do with it?”
“Play cars on it!”
Posted by GD Todd at 23:13